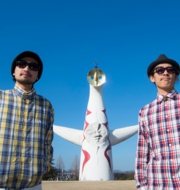 Both born in the auspicious year of the dog, DJ Yasa and DJ Hi-C make up the infamous turntable unit Kireek. Utilizing
their turntables beautiful changes and breaks tumble and cascade forth as if from aural kaleidoscopes. Their strongest
weapon is their philosophy: “1 plus 1 equals an infinity of possibilities. Armed; they crossover genres blending styles without
boundaries in their unique way rocking the floor with perfection. These alchemists of sound are without equal and recognize
no limits.

In 2007 they played at the pride and joy of Japan’s ravers, the Fuji Rock Festival. In the same year, they pushed aside all
the leading countries and captured the world champion title in the team category at DMC World DJ Championship, London.
Notwithstanding that this was their debut year! They never lost their momentum or pace and returned to the DMC World DJ
Championships in 2008, 2009 and 2010 to successfully defend their title for a world record equaling 4 times in a row. They
were the first Japanese DJs to ascend to such giddy heights. They didn’t stop there and finally, in 2011, they went where
no DJs have been before. By unanimous decision of the judges they were awarded the first ever perfect score, securing the
world record breaking 5 in a row, earning them a permanent place in the pantheon of legendary DJs.

Kireek’s unique style and sound has garnered much attention from far and wide, grabbing people’s attention and
bringing them international praise and recognition. They have been invited to delight audiences at the launch of the NIKE
DESTROYER jacket, shared the stage with luminaries such as DJ Krush and Prefuse 73, visited Russia to mark the launch
of the Toyota IQ and toured China increasing the love and bridging cultures. Their arresting performance on their original
battle breaks, KIREEK BREAKS, released in July, 2009 was acclaimed by DJs inside and outside Japan.
In March, 2013 they finally have released the first movie contents, KIREEK TV DVD, which includes whole championships' routines, and also a lot of private shots.

Their overwhelming power knows no bounds and is unrelenting as they continue to pursue an unknown world which only
Kireek could ever hope to navigate to...